Flume is an advanced file transfer and synchronization tool that significantly accelerates data transfers across global networks. Traditional TCP/IP based tools work well on local area networks but slow down and frequently abort as distances, congestion and network intermittencies increase. Flume works by virtually eliminating the challenges of latency and mitigating the effects of line degradation/congestion that limit traditional IP transfer technologies. By using Flume, a company can now move critical data across the internet faster and easier than ever before.

Contact us to learn more or schedule a demo

Flume directly attacks the challenges of latency, intermittency, and congestion, so encrypted, compressed, even random binary data is accelerated at the same rate.

Flume is not restricted by data volumes and because of its portability, even the smallest element or platform accelerates communications in a manner never before possible.

Flume uses industry standard algorithms to ensure that literally every bit of transmitted data is accurate – guaranteeing, even in the most challenging network environments, that mission critical data is sent quickly and accurately.

Flume is a complete data transfer and synchronization utility that maximizes data throughput by minimizing the effects of latency, intermittency and congestion on worldwide data transfers. The core Flume Engine achieves
its increased acceleration and throughput without modifying the data in any way or depending on previous transmissions to serve as foundations for incremental processing. Flume can also leverage optional data efficiency technologies such as block level synchronization and configurable compression to further accelerate file transfer operations. Flume reacts to past network conditions and predicts future network congestion in order to maximize use of available bandwidth while remaining “fair” to competitive traffic as demanded by network managers.

Why are traditional internet communications so poor over long haul networks?

More than half the total overall transmission time for a large file can consist of waiting for data packets to be transmitted to the receiver and acknowledgements of successful receipt to be returned. Due to this latency, increasing transmission bandwidth rapidly reaches a point of diminishing returns (see chart).

Lost or distorted data results in partial retransmission and magnified latency at best and total transmission aborts at worst. 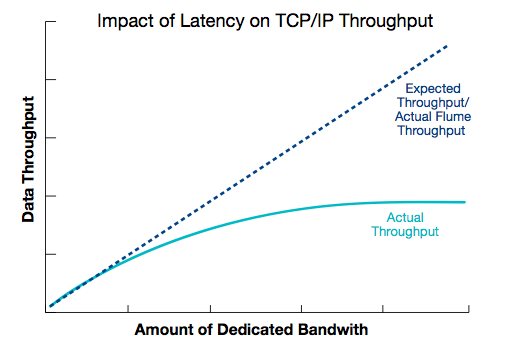 A large US Financial services company with operations in New York City and Hyderabad, India was unable to replicate all operation data between the two locations despite having a dedicated T1 line between the two sites.

Despite an approximate available bandwidth of 250 KB per second, the company was only able to attain a 35KB/s rate of throughput, due to long haul latency. Installing Flume on the link allowed the customer to increase their throughput to 170 200KB/second with the data throughput rate dependent upon concurrent network traffic.

Interested in conducting full nightly replication between the two sites, the customer leased 3 more T1 lines between their operations and leveraged Flume on the expanded link. As predicted, Flume scaled linearly with the added bandwidth giving 930-970KB/s of throughput of the available 1MB/s of bandwidth all the while allowing completely uninterrupted regular IP communications between the sites.

RHEL/CentOS 6, 7, and 8 and similar distributions
Windows 7 and later, and Windows Server 2012 and later
Raspberry Pi OS

The US Air Force’s Electronic Systems Center has proven Flume’s performance improvements on a number of military networks. Running on a military satellite link, Flume was able to improve transfer speeds by more than 10 times. Transferring data over a Joint Tactical Radio (JTRS), Flume was able to accelerate data by more than 3 times. The ESC also employed Flume to transfer data to and from vehicles in tactical situations, moving in and out of range and out of line of site of a wireless mesh network. Flume was able to successfully transfer data when other methods were crippled by the intermittency and degradation presented by the challenging conditions .

Flume is a client-server software solution. Flume does not require any special network hardware. Flume runs on standard virtual Linux machines with one machine required on each end of a desired connection.
read more →
Flume has continually been proven to leverage all available bandwidth - while being respectful to concurrent network traffic. A given network's characteristics (bandwith, congestion, distance) will determine the actual acceleration potential, but Flume has consistently proven to provide acceleration benefits as data is sent outside the local area network.
read more →
Flume is currently packaged in a configuration similar to the rsync directory synchronization utility with additional feature sets, such as advanced reconnection, data piping and packet level data integrity checking, not included in the rsync application.
read more →
No, Flume is commercial off the shelf software (COTS) and requires no internal hardware changes to be made.
read more →